No, I haven’t lost my mind, but I am a teacher and we love acronyms. At least I’m told I do; in reality, I can’t ever remember what they stand for. So why then am I starting off a post with and acronym? It was faster than typing out Try Something New Every Month.

In an effort to help use up my craft supplies as mentioned previously, I’m joining the monthly challenge offered by Swoodson Says to try something new every month. The basis of the challenge is to use up those supplies bought with the intention of trying that new project you just pinned and then stuffed the supplies away and forgot about it.

There are a few months in there where my project will be a stretch of the basic parameters, but I’ll make it work. You can check out the challenge here: T.S.N.E.M.

Each month will have an overarching theme that is very broad – even if you’ve been quilting for years, maybe there is a technique or shape or block you haven’t tried, as an example. (I’ve included the complete list at the end of the post.)

January’s theme is quilting. There is no way I’m going to make an entire quilt in the month of January. But I think I have an idea forming. Here is some inspiration that I found:

A pretty quilted pillow. That could be fun. I’m sure I have plenty of scraps to do something similar.

A stretch here, but a quilted canvas. Hrm…I think I’m on to something.

Another pillow and just in time for Valentine’s Day. I know I have Valentine’s fabric stashed somewhere.

Maybe some bibs. I know many people having babies soon. 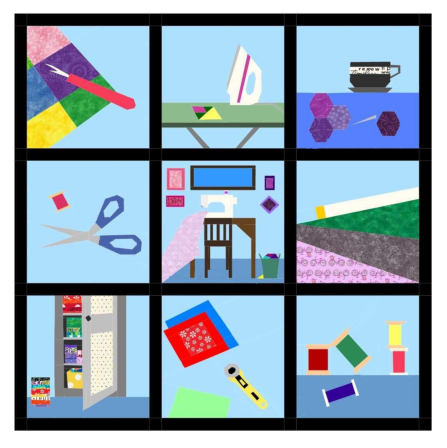 I’m intrigued by paper piecing. I’m not certain what it entails exactly, but this may be the month to find out.

Not sure this skirt fits into quilting. This skirt is 16 panels of 2 fabrics cut and sewn into zig-zags. I really want this skirt. It’s also a really big project.

I have borrowed all of these photos to show projects I would like to do. Each photo is linked to the blog where I found the project. Next week, I’ll have my own quilting project to share.

Try Something New Every Month Theme:

December – Choose your own!

Tagged as quilting, try something new every month, TSNEM