It is week 4 of the Summer Challenge hosted by Punk Projects. This week’s challenge was to use markers or ink of some sort. Imagine all the possibilities. I couldn’t think of any. First off, I’m not a huge fan of markers. I don’t like the lines they leave when you color with them. I’m a crayon kind of girl. To help my inspiration, I checked my saved pins on Pinterest.

The only pin I have involving markers was how to turn old markers into water-colour paint. (Which I may do next week.) Since that wasn’t helpful, I turned to Google’s search engine. That is where I came across this skirt. (Follow Link for photos) 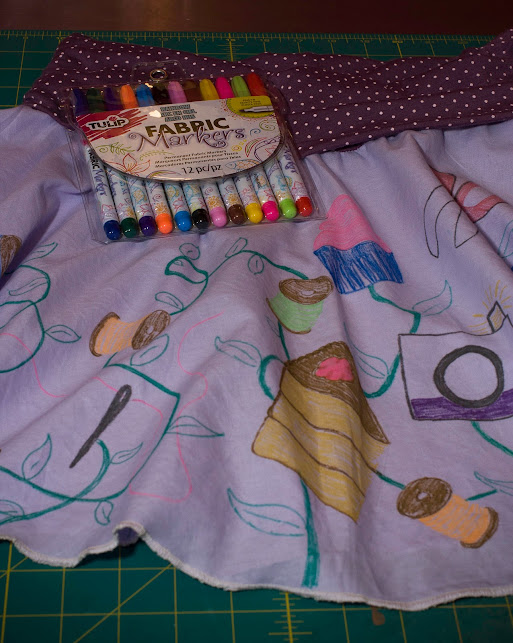 To start my project, I decided to make a circle skirt with a yoga waist band. I didn’t want to sew zippers this week. I have a delightful purple knit fabric that I was able to use for the waist band. I picked up a light purple cotton fabric from the store along with Tulip Fabric Markers. 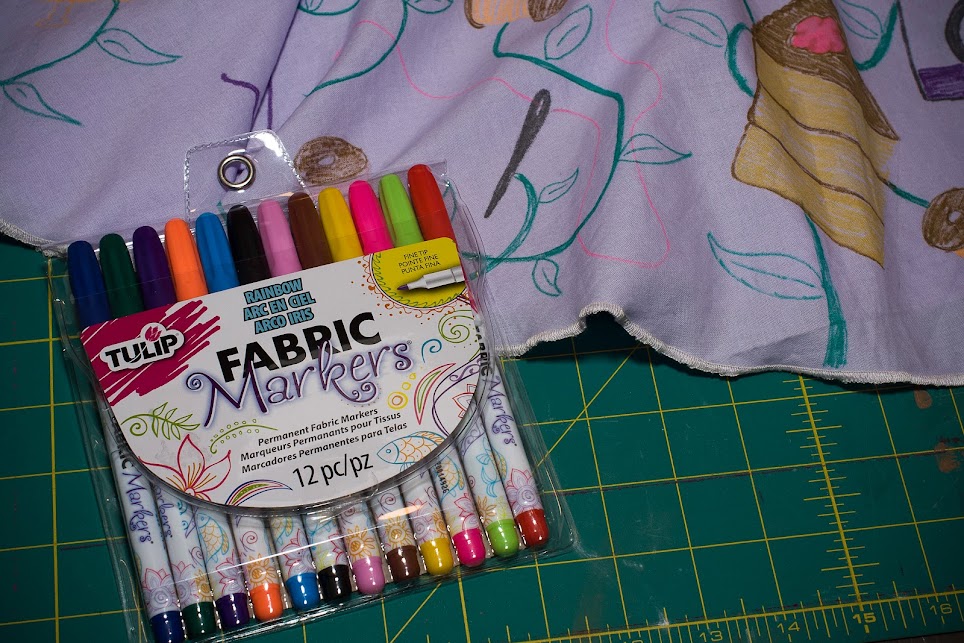 To make the waist band, I followed this tutorial over at makeit-loveit.com.  Then I used this tutorial over at Simple Simon to make the skirt.  I realise they are both tutorials for children, but each piece is easily made into an adult size with your personal measurements. I did find that my knit was stretchier than used in the tutorial.  To test this, I tried on the waist band after sewing it into a tube. I then resewed the seam to make the band smaller. 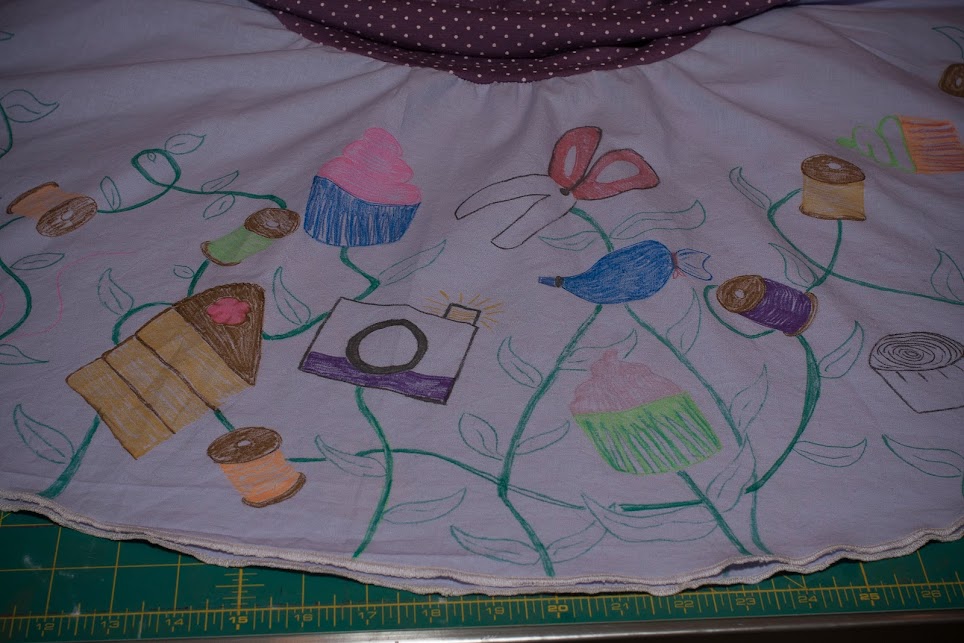 Now that the skirt was complete, it was time to start drawing. I was inspired by this colouring page released by Craftsy.com a bit ago. I like the idea of a craft supply garden. I did have to add a few other objects to my garden since my skirt is much larger than an average piece of paper. 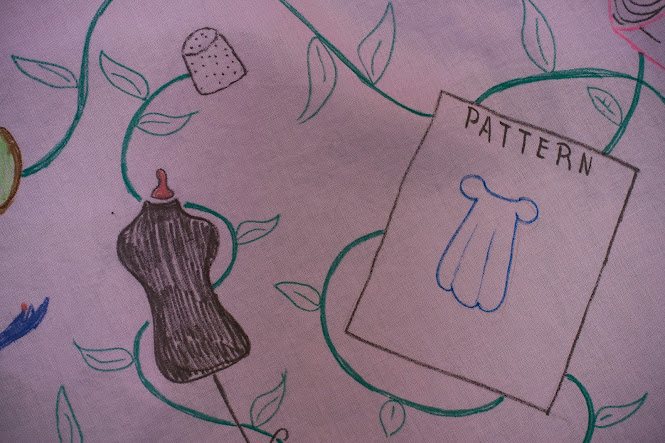 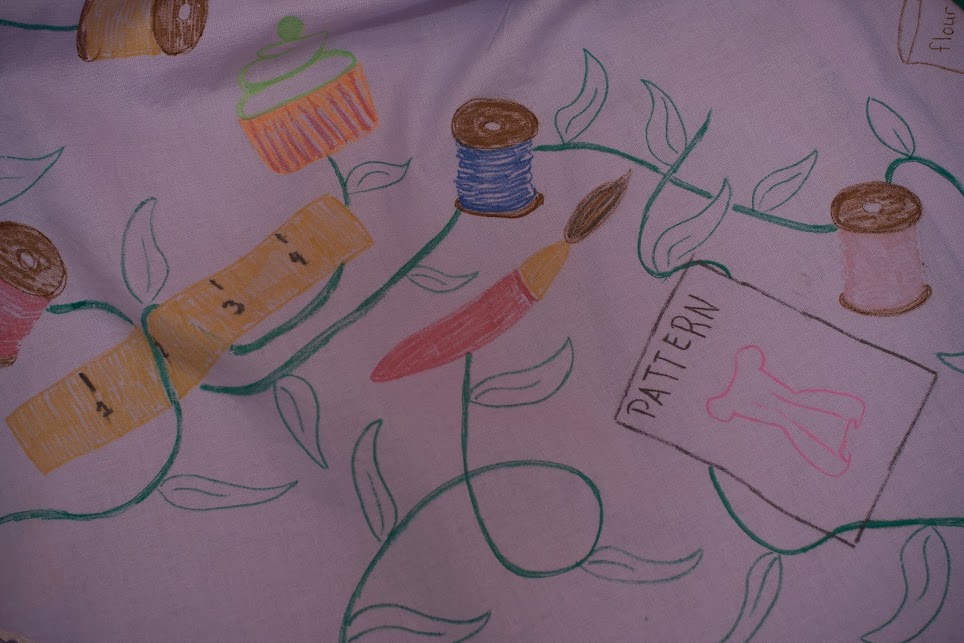 If you could see the continuous design, you would find that for the most part, each object is its own plant. There are a couple of larger object, like the patters, that are wrapped in stems. The spools of thread are a continuous vine that weaves in and out of the other “flowers.” 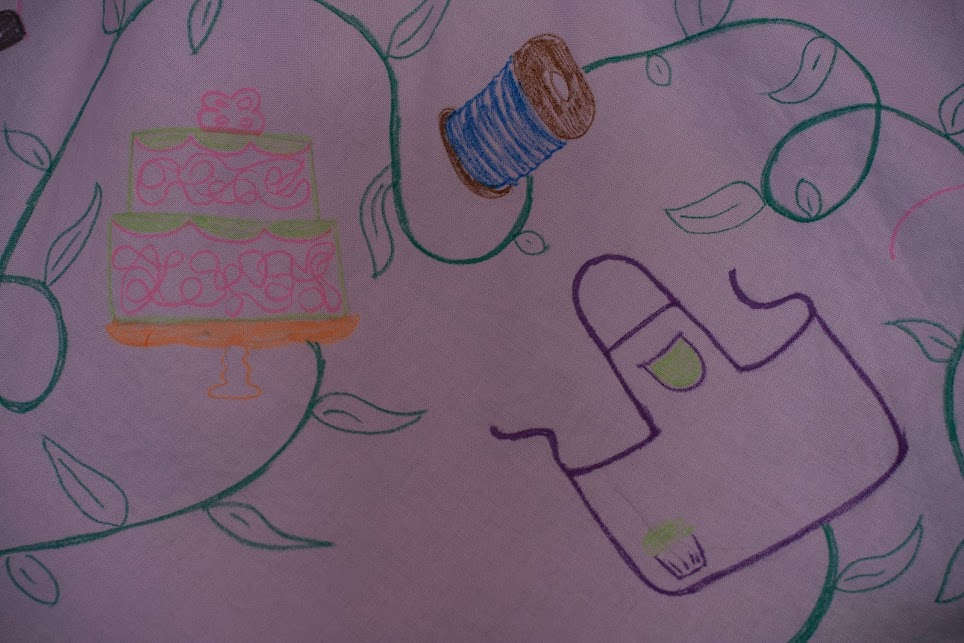 I still can’t say I’m sold on using markers, though I would like to try another project like this only get it closer to my inspiration skirt. The Tulip markers worked well for drawing lines, but they weren’t the best for colouring in spaces. This week I was also reminded of Swoodson Says year challenge for trying something new every month. Since I’ve never used fabric markers to decorate before, I believe this qualifies.